Tattooed nipples—it is the final procedure and the “crowning glory,” so to speak, of breast reconstruction.

Of course, the accurate term is areola pigmentation, but, more commonly they are called “nipple tattoos.” There are several other industry names for nipple tattooing. They include: 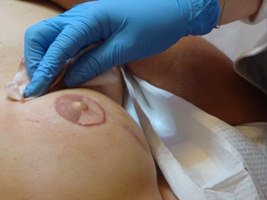 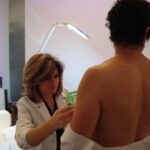 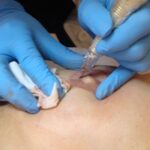 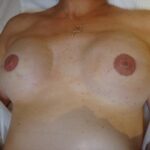 Nipple tattooing has advanced to a true art form. Finding an artist who is skilled in three-dimensional tattoos is worth the search because the results are far superior, and especially vital for those who have decided to nix the nipple nub. The 3-D effect for areola pigmentation has been aptly coined the “illusion of protrusion” by well-known industry expert Rose Marie Beauchemin, founder of the Beau Institute for Permanent Cosmetics.

A 3-dimensional areola tattoo gives the illusion of nipple protrusion without a surgical procedure.

“Advanced techniques are required for optimal 3-D results,” says Rose Marie. “An artist must become skilled in the elements of shadowing, highlighting, feathering and contouring. Of course, color selection is critical to good outcomes as well, so learning about color blending and pigment hues is key.”

If you have searched online to view nipple tattoos, it can be disheartening! That is why some women are afraid to get their tattoos; they can look freakish when done by someone without advanced skills. In the wrong hands and without dimension, nipple tattoos can result in what the industry calls the “bulls-eye” effect.” With an experienced artist skilled in 3-D effects, the results are very realistic.

Nipple-areola reconstruction surgeries create a raised nub of skin in the center of the breast mound and replicate an areola by grafting harvested skin (from the groin or stomach) around it.

Skin-flap procedures have simplified the nipple creation process whereby the surgeon frees up a section of skin atop the mound, swirls it into a nub, and sutures it into a protrusion. This simplified process is done in the office and only requires local anesthetics. In the past, surgeons would harvest a piece of cartilage from the ear to create the nub.

The Illusion of Protrusion

The 3-D effect for areola pigmentation has been aptly coined the “illusion of protrusion” by experts in the field. Advanced techniques are required for optimal 3-D results, requiring skills in shadowing, highlighting, feathering and contouring. Color selection is critical to good outcomes as well, so color blending with pigment hues is also essential.

A 3-dimensional areola tattoo gives the illusion of nipple protrusion without a surgical procedure.

One-dimensional tattooing can look freakish and result in what the industry calls the “bulls-eye” effect.  With an artist skilled in 3-D techniques the results are very realistic. This is why the online message boards are buzzing with name requests for artists skilled in the 3-D techniques that are crucial for those who have decided to nix the skin grafting and nipple nub.

Women now have a tool to make the permanent tattoo decision easier. The patented Rub-On Nipples® last one to two weeks and are easily removed with rubbing alcohol. They look amazingly similar to permanent 3-D nipple tattoos and help women visualize how they would look. They also fill the void for those who are not yet candidates for a permanent procedure, which is sometimes delayed for years when breast revisions are needed. This is because the size and shape of the breast mound must be finalized before placement of a nipple tattoo can be accurately determined.

During a permanent tattoo procedure pigment is implanted into the dermal layer of the skin by using tiny needles. The dermal skin layer is the middle layer between the epidermis (top layer) and hypodermis.

During a nipple tattoo here is what to expect:

Finding an areola pigmentation specialist is sometimes daunting for women trying to complete their breast reconstruction after mastectomy. Not all plastic surgeons offer this service; women are often left on their own while trying to find an experienced specialist. This is especially true for those who have delayed this final step in the process.

Part of the hesitation stems from confusion and misperceptions about the Goth culture at tattoo parlors. It is, however, not surprising that some tattoo parlor artists are highly skilled in 3-D techniques and do include areola tattooing in their services.

The burgeoning trend, however, in areola pigmentation is with permanent cosmetics professionals. These artists have been providing paramedical tattooing for decades and now seem to be cornering the market in providing areola tattooing.

Here are the types of artists and settings where areola pigmentation services are provided:

Plastic Surgeons: Some plastic surgeons will provide areola pigmentation as an office procedure. More often, however, they will have a staff member trained in the procedure. Surgeons also may bring in consulting specialists, as needed, or will provide referrals to a permanent cosmetics professional.

Permanent Cosmetics Professionals: Permanent make-up professionals are becoming the main go-to source for areola tattooing. The industry has embraced this need with a focus on education and compassion. Permanent make-up artists have been providing scar camouflage services for decades. It was a natural progression that this industry would provide areola pigmentation. Plastic surgeons often call upon permanent cosmetics professionals to provide areola tattoos, either in their offices or in the artist’s private facility.

Tattoo Parlor Artists: These traditional tattoo artists are highly skilled in all aspects of 3-D techniques. Their skilled artistry is certainly a baseline for areola tattooing. Many are well known for their excellent work and have opened their hearts and shops to women for these services. Misperceptions about tattoo parlors should not sway you from finding the best artist in your area.

Temporary Tattoos as a Temporary Solution

Rub-On Nipples® fill the void for women going through breast reconstruction who are not yet ready for a nipple reconstruction or permanent areola pigmentation procedure. These temporary areola tattoos last one to two weeks and are easily removed with rubbing alcohol. They offer a soothing, temporary solution during this stage.

Some use the temporary tattoos as a permanent solution.  Some women stop short of fully completing the process because they are weary of procedures, leery of the tattoo procedure or just so exhausted from their journey. Rub-On Nipples® offer a simple alternative so that they can experience the joy of this defining visual focus on their mounds.

Trained at the Beau Institute, Kristi has refined her skills through specialized experience. She provides her services in New Jersey for a renowned plastic surgeon who specializes in breast reconstruction.

Kristi was our artistic consultant as we began the development of our temporary areola tattoos.

If you are interested in discussing areola pigmentation or any other permanent cosmetic procedure, contact Kristi at her office. She sees clients at the following location:

Visit our Pinterest board that showcases artistic tattoos created for post-mastectomy women.

Disclaimer: The topics discussed in this web site are for informational purposes only. Opinions are based on personal experience and perspective. Recommendations should not be considered medical advice. Always confer with your physicians for health care decisions.